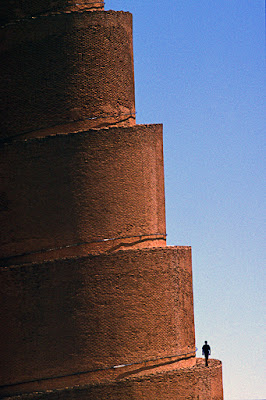 page 134: symmetry. Mathematical forms too. Jason Padgett, a number theorist and artist with Acquired Savant Syndrome, says "I see bits and pieces of the Pythagorean theorem everywhere. Every single little curve, every single spiral, every tree is part of that equation."


All of evolutionary change is built on a foundation of randomness. It provides the necessary material for natural selection which then does indeed bring forth  the order our inner mind so actively craves.

page 143: three short texts into new bacterium. At the time Charlie Brooker called it the world's most pretentious bacterium. Less than three years later it looks quite feasible, and perhaps even useful, to store all of Shakespeare on DNA.

page 146: viruses... in seawater are the commonest thing on Earth. See also An infinity of viruses.

page 148: what is beauty and why does it matter? Reflecting on Neuroaesthetics and the Trouble with Beauty by Bevil R. Conway and Alexander Rehding, Philip Ball writes:


Equating an appreciation of art with an appreciation of beauty is misleading. A concept of beauty (not necessarily ours today) was certainly important for, say, Renaissance artists, but until recently it had almost vanished from the discourse of contemporary art. Those who like the works of Marcel Duchamp, Joseph Beuys or Robert Rauschenberg generally do not appreciate them for their beauty. Scientists as a whole have always had conservative artistic tastes; a quest for beauty betrays that little has changed. Even the narrower matter of aesthetics is not only about beauty. It has conventionally also concerned taste and judgement. Egalitarian scientists have a healthy scepticism of such potentially elitist ideas, and it is true that arbiters of taste may be blinkered and dogmatic: witness, for example, the blanket dismissal of jazz by Theodor Adorno, a champion of modernism. But the point is not whether aesthetes are right or wrong, but whether they can offer us stimulating and original ways of seeing, listening and experiencing.

Lisa Randall, by contrast, says "the beauty of science - in the long run -- is its lack of subjectivity."

This is the tenth in a new series of notes and comments on chapters in The Book of Barely Imagined Beings. It appears around the time of the US publication, and adds to an earlier series that appeared around UK publication.

[Image of Malwiya minaret by Stuart Freedman]
Posted by Caspar Henderson at 06:30

People are always amazed at the beauty of Iridogorgia. I have published two papers on this genus, one describing some new species, and one suggesting one of my new species is the largest gorgonian known, at 5.7 m tall. But its the spiral form that is intriguing. Gorgonians generally have tried a number of ways to maximize the amount of water sampled by the polyps. Making a spiral is one of the ways, and adding branches to the outside of the spiral fills the space. If your straighten an Iridogorgia you will see that the branches all come off one side of the central axis. Pretty neat, and beautiful as well.

Thanks Les, that is fascinating. I see at least two paper of yours downloadable http://biotaxa.org/Zootaxa/article/view/zootaxa.3630.1.10 and http://works.bepress.com/les_watling/9/