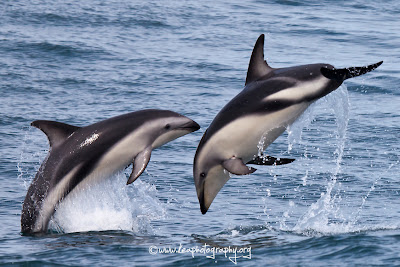 page 52: direct experience. In his forthcoming book, The Sea Inside, Philip Hoare describes an encounter with a super-pod of more than two hundred dusky dolphins (one of the species I would most like to see for myself):


I see their shapes, exquisitely airbrushed black and white and pearl-grey, swimming beneath me. Steadily the fins begin to gather and steer towards me, more and more, till I'm in an eddying mass or swooping, diving cetaceans. Everywhere I look there are dolphins; I'm encircled by them. They shoot from a single source like a shower of meteorites, their two-metre bodies zipping past, in and out of focus...

Dolphins are breaching right by me, turning somersaults in the air. How about this? Can you do that? I reach out instinctively; they easily evade me. That's not part of the game...

I look round and see dozens of dolphins heading straight at me, like a herd of buffalo. for a moment I think they're going to swim right into me. A ridiculous notion. They, like the whales, register my every dimension, both inside and out, my density, my temperature, what I am, what I am not. A dolphin's sonar, which can fire off two thousand clicks a second, is able to discern something the thickness of a fingernail from thirty feet away. At the last minute the animals swerve aside, under my legs, by my side, past my head.

page 53: saved from drowning. It may be that dolphins are treating humans in distress as they would other dolphins in their pod. See, for example, Leave No Dolphin Behind: Dolphin Pod Carries Injured Member Until She Stops Breathing.

page 55: annual cull in Taiji. a supposedly more humane a new way of killing dolphins in drive hunts is, reportedly, no more so than the previous techniques.

page 60: every dolphin has its own characteristic whistle. See, for example Dolphin whistles reveal individual names.

page 56: 'non-human persons.' For some recent commentary see When is a Person Not a Human? When it’s a Dolphin, or Chimp, or…

This is the fifth in a new series of notes and comments on chapters in The Book of Barely Imagined Beings. It appears around the time of the US publication, and adds to an earlier series that appeared around UK publication.
Posted by Caspar Henderson at 06:35