...and other animals in the International Institute for Species Exploration's top ten new species of 2010

Posted by Caspar Henderson at 07:55 No comments:

Tales from the Crysophere

For literally centuries, polar explorers have been aware that in the springtime the bottom of seasonal sea ice becomes visible discolored. Today we know that what they were seeing is a photosynthesis-based biofilm of grand proportions. By March, when the sun spends enough time above the horizon to initiate the ice-algal bloom, the sea ice cover over the Arctic Ocean alone (sea ice also surrounds Antarctica, of course) extends more than 14 million square kilometers, even in this era of climate-driven reductions in the cryosphere. Only in the last decade, however, have we realized that this highly porous sea ice, flushed at its ice-water interface with seawater from below, is also filled with EPS, the sticky exudates of microscopic algae and bacteria that partially account for their entrapment in the ice as it forms in autumn and through winter. These compounds, which partition into the brine phase of the ice along with the microbes and other “impurities” of seawater, are now understood to serve a myriad of biological functions within the ice, from cryo- and osmoprotection to possible viral defense.

-- from Frost Flowers Come to Life by Jody Deming 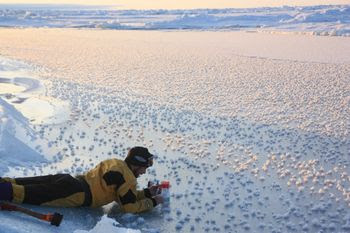 The art of memory 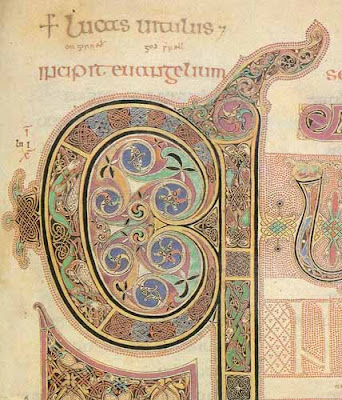 During the Middle Ages they understood that words accompanied by imagery are much more memorable. By making the margins of a book colorful and beautiful, illuminations help make the text unforgettable. It’s unfortunate that we’ve lost the art of illumination. The fact that books today are mostly a string of words makes it easier to forget the text. With the impact of the iPad and the future of the book being up for re-imagination, I wonder whether we’ll rediscover the importance of making texts richer visually.

-- Joshua Foer
Posted by Caspar Henderson at 23:01 No comments:

Email ThisBlogThis!Share to TwitterShare to FacebookShare to Pinterest
Labels: arts

There are more viruses on Earth than there are stars in the universe.

If you stacked every virus end to end they would stretch 100,000 light years.

10 percent of all the photosynthesis on the Earth is carried out with virus genes.

Life as we know it may owe its existence to viruses.

Astonishing facts such as these pepper Carl Zimmer's A Planet of Viruses, a book whose ten short and clear chapters offer as good an introduction to these extraordinary entities -- microbiology's polymorphous Trimurti -- as you could wish for. [1]

Research into the nature of viruses and their significance to life as a whole has exploded in the last couple of decades. There is, surely, much more to discover. For now at least three fundamental points seem clear: viruses are ubiquitous, diverse, and have played a central role in the evolution of (virtually) all life forms.


The genes in a human and the genes in a shark are quite similar -- so similar that scientists can find a related counterpart in the shark genome to most genes in the human genome. The genetic makeup of viruses, on the other hand, matches almost nothing. In a survey of viruses in the Arctic Ocean, the Gulf of Mexico, Bermuda and the northern Pacific, scientists identified 1.8 million viral genes. Only 10 percent of them showed any match to any gene from any microbe, animal, plant or other organism -- even [to] any other known virus. The 90 percent were entirely new to science. In 200 litres of seawater, scientists typically find 5,000 genetically distinct kinds of viruses. In a kilogram of marine sediment, there may be a million kinds.

One speculation: if -- as has been suggested [3] -- the ancestors of viruses predate cells, could they have played a role in the emergence of life itself from what Martin Nowak has called 'pre-life'? [4], [5]

[1] Like other reviewers such as Maggie Koerth-Baker at Boing Boing I received a free review copy.

[5] As Zimmer reports, Patrick Forterre has proposed that in an RNA world, viruses invented double stranded DNA as a way to protect their genes from attack. 'Eventually their hosts took over their DNA, which then took over the world. Life as we know it...may have needed viruses to get its start.'

P.S. In the second section of this essay drawing on his book The Mathematics of Life, Iain Stewart explores how the structure of viruses can be explained by maths.
Posted by Caspar Henderson at 07:28 No comments:

Email ThisBlogThis!Share to TwitterShare to FacebookShare to Pinterest
Labels: virus


Science is what we have learned about how to keep from fooling ourselves.

The quotes appear in, respectively, an article by David Deutsch, and an article about Deutsch and quantum computing by Rivka Galchen.
Posted by Caspar Henderson at 07:53 No comments:

Posted by Caspar Henderson at 07:59 No comments: