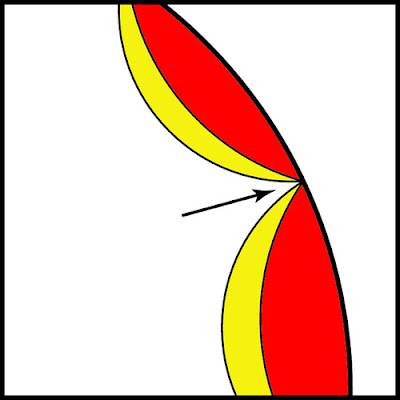 In an attempt to account for what happened before the big bang, as well as the smallness of the cosmological constant, some physicists have been led to a model where our entire observable universe is contained inside a bubble, which is expanding at the speed of light into an exterior space.

But our bubble is not the only one; outside our bubble, there are an infinite number of other bubbles, all expanding just like ours. Sometimes they collide and send waves of death that wash across our universe. In this figure, the regions colored red have already been swept clean by the wave, and the yellow regions can see it coming.

A clear prediction of the model is that Earth resides in the thin sliver, or finger, that forms when two bubbles that have both collided with our bubble narrowly miss one another, indicated here with an arrow. It is thanks to our location here, in a finger, that despite the enormous swaths of our universe decimated by these waves, the odds are exponentially small that they lie in our future. We can all sleep sounder, and it's all because we live in a finger.