The universe is made up of stories, not of atoms.

So said Muriel Rukeyser. And for humans, at least, it seems to be true. [1]
Brian Boyd sees it like this:

In other species we can recognize the ﬁrst impulses of art but no more. Other animals can engage in exploratory behavior that seems designed to appeal to the mind, but only in isolated and incidental fashion. [2] But in our own species the impulse to art develops reliably in all normal individuals. The isolated sparks in other species have become the steady current of human art.

Narrative and story are not, of course the sum total of human art. They are, however, almost always implicit in virtually every aspect of it. So what about some of the 'big' stories for the future? End of the Line, a new film on the crisis fisheries [3], offers two typical possibilities. The first, put crudely, is disaster. A north African diver says (humorously and as provocation, but also seriously):

Man is not going to change, and the sea is going to be dead. Because Man is crazy.

The second, crudely, is hope. Callum Roberts, a marine scientist, warns that "our ability to arm and exploit far outweighs our ability to control ourselves," but offers a compelling account of how people working together and "resolute in protection" can reduce the likelihood of disaster. 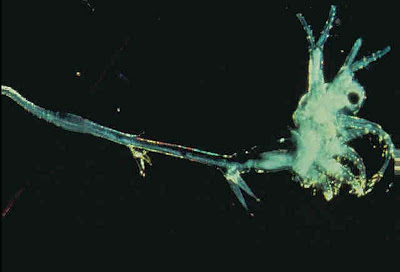 The basic and very simple idea, as we will see in future entries, is that the human being is first and foremost not an isolated subject, cut off from a realm of objects that it wishes to know about. We are rather beings who are always already in the world, outside and alongside a world from which, for the most part, we do not distinguish ourselves.

What characterizes a human life are engagements... Consciousness is more than merely being aware. It is also being involved.

[3] See Organised crime. And see Big fish for a reference to the excellent book The Unnatural History of the Sea by Callum Roberts.
Posted by Caspar Henderson at 09:15