Perhaps the most remarkable functional interpretation of a 'trivial' character is given by [Sidnie] Manlon's work on the diploid Polyxenus, in which she has show that a trait formerly described as an 'ornament' (and what could be more useless?) is almost literally the pivot of the animal's life.

--from The Perfection of Animals (1964) by A. J. Cain, quoted in On the Origin of Stories by Brian Boyd. 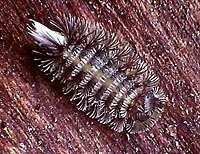 Posted by Caspar Henderson at 13:54