Reviews by Saswato Das and Christine Keneally of two books on how fire 'made us human' focus on cooking. [1]

But it's not just food, and thereby ourselves, that we have transformed through fire. It's also the planet -- through what Stephen Pyne calls 'second fire', the deliberate use of fire by Man to foster ecological regimes to its [his] benefit. If we are 'the cooking ape' then it is more than food we cook. 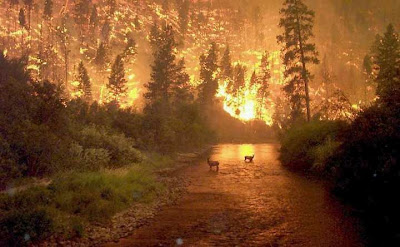 
It is particularly true for agriculturalists: the saga of first contact takes the form of a great fire. The Malagasy call it afortroa. Maori myths record how the first arrivals lit fires everywhere, burned off forests and wiped out moas. Madeirans preserved the legend of a Seven-Year Fire that drove the first settler into the sea for protection and then, smoldering, let the isle as malleable as a lump of white iron drawn from a furnace. The cosmology of the Stoics was built around a recurring world conflagration. The Aztecs performed a New Fire ceremony, symbolically rekindling the world, every 52 years. Modern myth-making has continued the trope. Star Trek's Wrath of Khan features a "genesis device" capable or remaking planets. The "genesis effect" begins with a fiery blast and spreads its "new matrix" over cold-dead rock with a flaming front. More slowly and bumptiously, that is precisely what humans did with the Earth. [2]

[1] Fire: The spark that ignited human evolution by Frances D. Burton and Catching Fire: How cooking made us human by Richard Wrangham. Seed has an interview with Wrangham. See, too, blog post in this series The raw and the cooked.