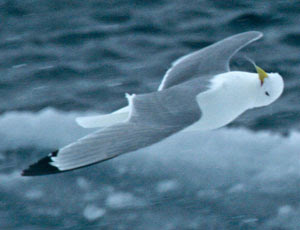 A bird watcher named Bill Reed observed and photographed a kittiwake in Svalbard seeming to fly upside down (see photo). What, he asks, is going on? I agree with those who say the bird is looking over its shoulder, not flying upside down. [1]

But observations of other birds flying upside down are said to well documented. In Pleasurable Kingdom: Animals and the Nature of Feeling Good, Jonathan Balcombe says there are many accounts of raven antics in [refereed] scientific journals and books. "A notable trick is flying upside down, sometimes for 100 meters or more."

The reason, he argues, is play -- behaviour that is both adaptive and pleasurable [2]:

in Iqualit, a village north of Hudson Bay, locals have seen ravens hanging upside down, swinging and somersaulting over powerlines, hanging from them with their bills, and sliding down roofs...On another occasion, two ravens played a form of 'rodeo' on two loosely strung, wind-whipped overhead power lines. They too turns trying to grasp the second wire in the bill and hand on as long as possible.

...Raven authority Bernd Heinrich has watched Houdi, one of the birds he raised from a chick, sliding and rolling on her back repeatedly down a two foot high snow mound. 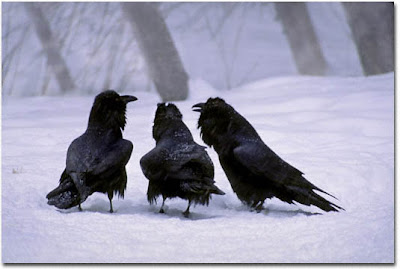 [1] (added 12 June): "Apparently this kind of twisting and turning is called 'whiffling'." See the comment at bottom of this post.

[2] If, as seems likely, this explanation is true, it is also the case that play is part of a rich array of behaviours. And there is an almost endless supply of stories about ravens. Among the ones included in Graeme Gibson's Bedside Book of Birds are two told by the unlikely pair of John Wesley and Farley Mowat. Wesley, writing in 1790, tells of an old raven that deeply in love with an old Newfoundland dog. It barks like the dog barks, is inconsolable when they are apart and collects food for the dog against its return. Mowat (in Westviking, 1965) tells the story of how Flóki Vilgerðarson's used ravens to find distant land on his navigation across the open ocean from Norway to Iceland (finding land, as Noah does, with a raven, the first bird mentioned in the Bible). "Some people deride this account as apocryphal," writes Mowat. "There is no reason to think it is anything of the sort. On the contrary, [raven-assisted navigation] was no more than what one might expected from a seafaring people who were very closely attuned to the world in which they lived". And then there is Italo Calvino's story Last Comes the Raven, recalling his days with the partisans...
Posted by Caspar Henderson at 09:00

I've seen an image of a goose in a similar pose-- apparently this kind of twisting and turning is called "whiffling" and birds may do it when coming in for a landing.