Deep history of life, and its future

Yesterday I listened to talks at the Geological Society by Lynn Margulis and Martin Brasier under the joint title Deep History of Life on Earth. Among take-home points, Margulis outlined what she described as five extensions of Gaia theory as of 2009:

1. Redistribution of elements
2. Salt: redistribution and retardation of its dissolution
3. Augmentation of solid, liquid and gas interfaces
4. Water retention and distribution on a planetary scale
5. Production of granite (a mineral found nowhere else in the solar system, comprising 0.4% of the Earth lithosphere) [1]

I asked Prof. Margulis if she had anything to say about Peter Ward's Medea hypothesis. She did not. Crispin Tickell, chairing, said it did not, in fact, contradict Gaia. [2]

Martin Brasier outlined key points from his book Darwin's Lost World, including the idea that the development of an anus (a through-gut and the capacity to digest in new ways) was a fundamental (my bad pun, not his) innovation enabling the Cambrian explosion.
He said his hunch was that the perturbations in the Earth system consequent upon human activities were so great that 'we could be on the cusp of a Cambrian-like transformation' of life on Earth (bigger than, say, the K-T) though whether it would be a 'new Cambrian explosion' or a 'return pre-Cambrian conditions' he was not, when I asked him, inclined to speculate. 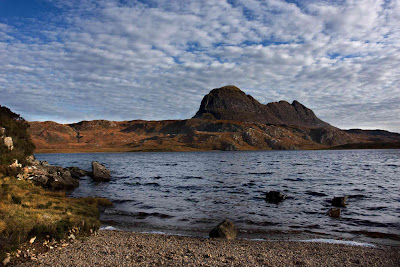 Where the dust blows through these heights there once shone a silent sea. [3]

[1] Margulis spells out these questions and others more fully in a contribution to Scientists on Gaia (2004). See comment attached at the foot of this post.

[2] It seems to me, though, that there may be something to be said for Tyler Volk's view that 'Gaia is life in a wasteworld of byproducts' (dubbed 'Garbage Can Gaia' by Ward), and Prof. Basier hinted as much.

[3] The image is Suilven, an inselberg of Torridonian sandstone on top of Lewisian gneiss. The quote is from Cold Mountain. Brasier imagines Charles Lyell sketching three riddles after a walking on Quinag:

1. A mountain that stood on its head.
2. An ocean that disappeared.
3. A rock that swallowed time.

P.S. 8 July: The continents 'were green' in the Neoproterozoic, according to a Letter to Nature from L. Paul Knauth & Martin J. Kennedy. See also Dawn of the animals: Solving Darwin's dilemma.
Posted by Caspar Henderson at 07:17

In Scientists on Gaia, Margulis suggests the following questions that would not have been asked without Gaia theory:

1. Are plate tectonics (i.e. the lateral movements of the lithosphere apparently limited in the solar system to the Earth) a Gaian phenomenon?

2. Is the remarkable abundance of aluminosilicate-rich granite, a crustal rock type unknown elsewhere in the solar system and one that comprises 0.1% of the Earth’s volume, directly related to the presence of life? Did water flow and oxygen release, so strongly influenced by life over 3 billion years, generate the granitic raised portions of the plates?

4. Is the rate of dissolution of vast quantities of salt retarded by biological activity (e.g. tin the M-layer beneath the Mediterranean sea, the Hormuz basin of Iran, the Texas Permian Basin deposits, and the great German and North Sea Permian zechstein deposits)? In other worlds, are the worldwide evaporite deposit patterns a Gaian phenomenon?

5. Can long-lasting thermodynamic disequilibria and reactive gaseous chemical anomalies in a planetary atmosphere be taken as a presumptive sign of life?

6. Is life primarily responsible for the enormous differences in the meters of precipitable water on the surfaces of the three silica-rich inner planets (Venus, 0.1m; Earth 3000m; Mars, 0.0001m)? what have been the biological modes of water retention on Earth since the Archaean eon?

7. If Earth’s surface temperature has been modulated mainly by carbon dioxide and other carbonates, and organic compounds being removed from the atmosphere into limestone, to what extent have chemoautotrophic, anoxygenic phototropic, and other metabolic pathways of CO2 reduction supplemented the oxygenic photoautotrophy of cyanobacteria, algae and plants?

8. Can environmental regulation studies be value and representational in “mini-Gaia” contained systems that are closed to matter but open to sunlight or other electromagnetic energy fluxes?