The official message is to stabilise CO2 emissions "at a safe level to avoid not only dangerous climate change but also dangerous ocean acidification".

The likely reality, according to James C. Orr, is that "the chemistry is so fundamental and changes so rapid and severe that impacts on organisms appear unavoidable. The questions are now how bad will it be and how soon will it happen."

I'm still trying to take on board what Orr told me in 2006: "Our children will no longer be able to see the amazingly beautiful things that we can. I tell my son, go to see the corals now because soon it will be too late." 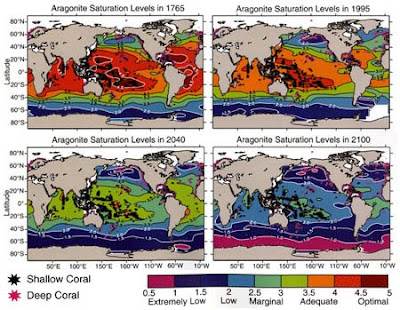 tropical surface waters will be the LAST part of the oceans where limestone becomes under-saturated. ...Alarm about acidification effects on coral reefs is based on fundamental misunderstanding of the CO2 cycle in tropical surface waters. This is not to say that it is not an important long-term problem, but only that it is trivial compared to bleaching as a source of coral mortality and growth decline.

Posted by Caspar Henderson at 08:52