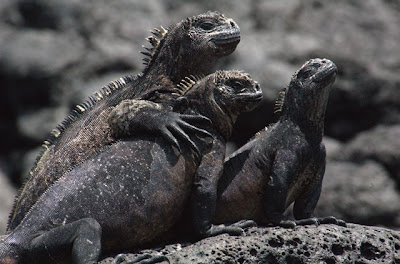 Some fascinating provocations from Richard Dawkins, Kenneth Miller, Frans de Waal and thirteen others. But what thinking ahead is needed now as Man increasingly understands the selective pressures of [his] actions on ecosystems and other species and in some cases takes charge of evolutionary processes?

P.S. 29 Jan: According to Overcoming bias:

Any Future not shaped by a goal system with detailed reliable inheritance from human morals and metamorals, will contain almost nothing of worth.

Elsewhere, contemplating "the adjacent possible of the biosphere", Stuart Kauffman has written:

As organismic diversity increases, and the "features" per organism increase, there are more ways for selection to select for mutualisms that become the conditions of joint existence in the universe. The humming bird, sticking her beak in the flower for nectar, rubs pollen off the flower, flies to a next flower for nectar, and pollen rubs off on the stamen of the next flower, pollinating the flower. But these mutualistic features are the very conditions of one another's existence in the open universe. The biosphere is rife with mutualisms. In biologist Scott Gilbert's fine phrase, these are codependent origination—an ancient Buddhist phrase. In this open universe, beyond entailment by fundamental physics, we have partial lawlessness, ceaseless creativity, and forever co-dependent origination that changes the Actual and the ever new Adjacent Possible we ceaselessly self-consistently co-construct. More, the way this unfolds is neither fully lawful, nor is it random. We need to re-envision ourselves and the universe.

In his novel Raw Youth (note Adam Phillips and Barbara Taylor in On Kindness), Dostoyevsky:

describes a morning when people wake to find themselves alone in a godless universe. Acknowledging their human vulnerability, they respond to it positively...When God is dead, kindness is all that people have.

Posted by Caspar Henderson at 20:32