Getting lumpy on the GBR

Porites are seldom regarded as beautiful. They are, however, often among the most robust coral species. So the decline in calcification rates reported from the Great Barrier Reef looks like a real cause for concern. [1] 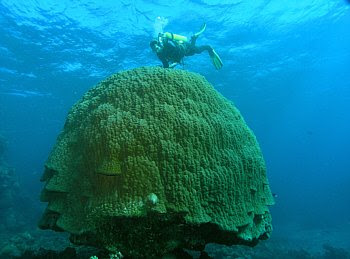 In December 2008, notes Elizabeth Pennisi, a 4-year assessment of the Status of Coral Reefs of the World said that 45% of the world's reefs were healthy with no significant threats from human activity on the horizon. [2] But looks can be deceptive. Anne Cohen of Woods Hole says "Even though the corals look healthy, some pretty dramatic changes are occurring beneath the surface." [3]

More on this by John Bruno and Ove Hoegh-Guldberg at Climateshifts.

2. Noted on this blog at A glass almost half full. For some background and context see Coral Bones.

3. Calcification Rates Drop in Australian Reefs DOI: 10.1126/science.323.5910.27. Pennisi reports that the role of acidification in this decline is "far from settled". Alina Szmant of the University of North Carolina concludes, "It's not clear that carbon dioxide enrichment will have negative effects on calcification rates." [Question: why did the calcification rate increase by 5.4% between 1900 and 1970 (before falling 14.2% between 1990 and 2005)?]

P.S. 4 Jan: a comment on resilience by Tom Goreau here.
Posted by Caspar Henderson at 07:39