A massive change has...occurred in the airspace above wars. Only a handful of drones were used in the 2003 invasion of Iraq, with just one supporting all of V Corps, the primary U.S. Army combat force. Today there are more than 5,300 drones in the U.S. military’s total inventory, and not a mission happens without them. One Air Force lieutenant general forecasts that “given the growth trends, it is not unreasonable to postulate future conflicts involving tens of thousands.” 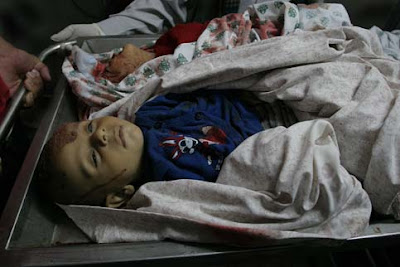 The U.S. military may be proud of their new toys. The child corpses in the photograph are from Gaza, where drones have taken out kids playing on rooftops, but they could as well be from Pakistan or Afghanistan where, as William Dalrymple notes, multiple killings of civilians by drones are contributing mightily to radicalization.

P.S. A longer version of P.W. Singer's thesis appears in The New Atlantis.
Posted by Caspar Henderson at 22:06