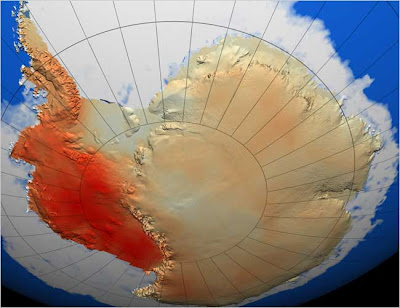 It's reported that the Wilkins Ice Shelf is on the brink of collapse and a paper in Nature [1] offers clear evidence that Antactica is warming in step with the rest of the world (BBC, NYT) [2].

Barry Lopez wrote Arctic Dreams before present rapid changes in the Polar climates were well understood. [4] But Lopez was haunted by unease at the role of industrial man, alluding to the Eskimo terms ilira, fear that accompanies awe, and kappia, fear in the face of unpredictable violence.

As late as the early industrial period (the early nineteenth century), creatures such as the Greenland right or Bowhead whale (Balaena mysticetus) still resonated with something of the monstrous that had fascinated and appalled earlier Europeans. 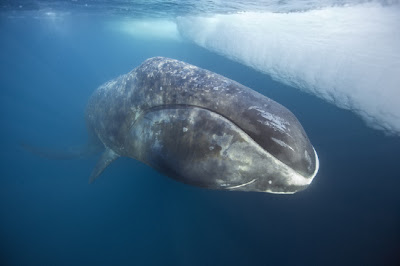 A month before she entered Lancaster Sound in 1823, the [British whaler] Cumbrian killed a huge Greenland right [whale], a 57 foot female, in Davis Strait. They came upon her while she was asleep in light ice. Awakened by their approach, she swam slowly once around the ship and then put her head calmly to its bow and began to push. She pushed the ship backward for two minutes before the transfixed crew reacted with harpoons. The incident left the men unsettled. They flinched against such occasional eeriness in their work. [5]

But, Lopez shows, when you pay attention to the remarkable nature of this animal it is men's actions towards them that now seem monstrous:

The skin of [the Greenland right whale] is slightly furrowed to the touch, like coarse-laid paper, and is a velvet black color softened by gray. Under the chin and on the belly the skin turns white. Its dark brown eyes, the size of an ox's, are nearly lost in the huge head. Its blowhole rises prominently, with the shape of a volcano, allowing the whale to surface in narrow cracks in the sea ice to breathe. It is so sensitive to touch that at a bird's footfall a whale asleep at the surface will start wildly. The fiery pain of a harpoon strike can hardly be imagined. (In 1856, a harpooner on the Truelove reported a whale that dived so furiously it took out 1200 yards of line in three and a half minutes before crashing into the ocean floor, breaking is neck and burying its head eight feet deep in the blue black mud.) [6]

Today our "monsters" lurk elsewhere. Ilira kappia stabs us not from behind but from within our own shadows.

4. The discovery in 1985 of the "ozone hole" above Antarctica shocked many people into increased awareness of the potential of human activity to substantially affect whole earth systems on a short time scale. It helped pave the way for greater acceptance of the case for anthropogenic global warming. (See Breaking into politics 1980-88 in The Discovery of Global Warming by Spencer Weart). Arctic Dreams was published in 1986. I have recently gone back to if for the first time in many years thanks, in part, to a prompt by JML.

5. From the prologue of Arctic Dreams. In Waiting for Salmon (2006), Lopez writes of the fury of many of his compatriots at the idea that nature is anything but a warehouse to be emptied prior to a rapturous departure:

To speak of large-scale changes in the natural world that might be traced to human activity is anathema to people still furious at Darwin for suggesting that 'nature' included man...[In] America, mainstream politics is uninformed by, event hostile to, biology.

6. Lopez quotes the Canadian historian W. Gillies Ross as 'cautiously' suggesting that as many as 38,000 Greenland right whales may have been killed in the Davis Strait fishery, largely by the British fleet. 'A sound estimate of the size of the population today [1986] is 200.' 90% of the indigenous human population may also have died as a result of European incursion and infectious diseases.
Posted by Caspar Henderson at 08:35