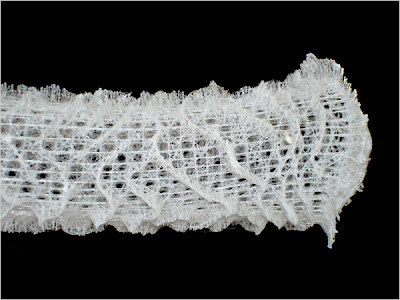 This glass sponge (class Hexactinellida) created dense reefs in ancient seas that were shallow and warm. "The delicate animals were thought to exist only as fossils", says an article about a new illustrated Atlas of the Oceans, "until explorers in the 1990s discovered large reefs of living relics." The Sponge Reef Project says:


Siliceous sponge reefs or mudmounds occur several times in Earth history and they culminate in the Late Jurassic where they formed a discontinuous deep-water reef belt extending more than 7000 km. This reef system was the largest biotic structure ever built on earth. The largest reef of today, the Great Barrier Reef in Australia (2000 km), is relatively small compared to the Jurassic sponge reef belt.

Posted by Caspar Henderson at 08:28