The extinction of animals, undertaken by the colourist Walton Ford

According to the New England Journal of Aesthetic Research, "a tale of conquest and colonization and accumulated injuries against nature...is at the heart of Walton Ford’s allegories". For Bill Bufford, Walton Ford is Bruegel by way of Borges. 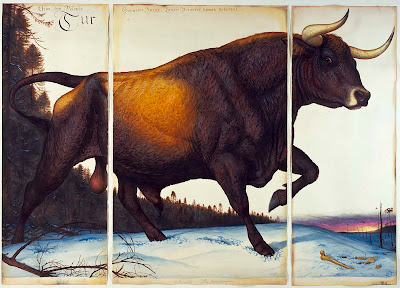 Tur (an Aurochs), purchased by the Smithsonian. 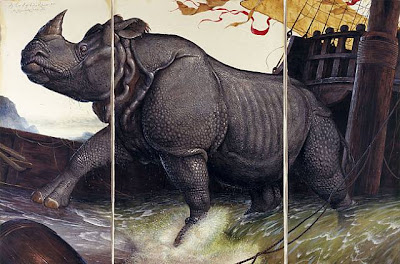 Loss of the Lisbon Rhinoceros


At first glance, the long procession of great auks in "Funk Island" winds, lemming-like over a rocky landscape, toward the distant fires and cauldrons that signal their extinction as a species. Clear enough, but what is going on in that huge cloud of smoke from the fires? Close examination reveals dozens of naked men and women in erotic combinations. Ford's research had disclosed that the flightless auks were clubbed to death, in the eighteenth and nineteenth centuries, so that their plumage could be used in feather beds and pillows. "This was the global economy in action, right?", he said. "It was like goddam Auschwitz for birds, so the Marquis de Sade and Casanova could do their fucking on feather beds!"...

[A new painting of] mountain lions was nearly done when I visited his studio in mid November. Lately, he explained, there had been numerous sightings of these big cats in the Berkshires, "although not one sighting is documented, and there's no evidence -- no scat, no tree scratchings, not attacks on pets or joggers. Mountain lions have been extinct in New England for decades." Ford's painting is set in a local cemetery, where several pairs of mountain lions are copulating among gravestones. "they're making more ghost cats for people to see", he said. His are life-size, and very lifelike.

I'd like to suggest an animal for inclusion in a future painting: the Northern elephant seal. Perhaps Ford has already done this or considered it only to reject it, and if so the more fool me. Still, in support of my case here's an anecdote which I may have imagined but think I heard at Año Nuevo SNR:


The elephant seal was hunted to the brink of extinction in the nineteenth century. As we now know, a few survived, but by the late nineteenth century it was believed the species was actually extinct.  Then a research party (from the Smithsonian, no less) stumbled on small group of survivors [on Guadalupe Island off Baja?]. They slaughtered them all for study, stuffing and mounting even though for all they knew these might be the last ones in the world.

That's how I remember the story, but I am happy to be corrected. With or without the anecdote, elephant seals are the tops. 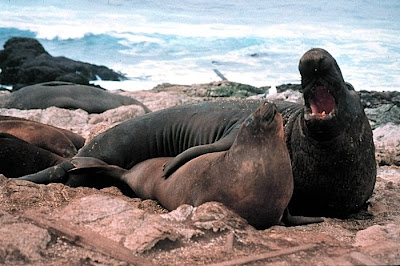