Noting gaps in Charles Darwin's knowledge, John Whitefield also highlights of some of ours today:

The debate now centres on whether the patterns seen in the rocks -- mass extinctions, sudden burst of diversification, the timing of the origin of particular groups --reliably reflect the history life, or whether they're artefacts of preservation and sampling. Does diversity, in general, seem to rise through time, for example, because we have more new rocks than old ones?

Molecular clocks -- using DNA differences to estimate divergence times -- have thrown another factor into the mix, because they tend to suggest that most groups originated long before they show up in the rocks.

They had to have arose a bit earlier, of course, but often molecular dates of origin are twice as old as fossil dates. Some molecular studies, for example, put the origin of the animals back to about one billion years ago, hundreds of millions of years before any fossils show up. Some have argued that the improbability of soft-bodied animals being fossilized explains why they don't show up in the rocks. Other think the molecular clocks are wrong. 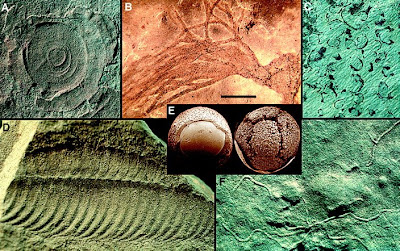 image: from Knoll & Carroll
Posted by Caspar Henderson at 15:50