On not crashing the planet

The discovery [that these jellyfish are spreading almost everywhere] underscores "our remarkable underestimation of the extent to which the ocean has been reorganized."

-- says the marine biologist James Carlton in a report about "immortal" jellyfish swarming the world's oceans. [1]

Humans, it appears, may be learning ever more about ecosystems and our impacts upon them, but we often do so as a by-product of what looks (with hindsight) like blind stumbling. [2] An example may be the transportation of billions of gallons of sea water around the world as ballast, which Craig Venter calls:

a giant ecological experiment we have been doing irrationally for decades and decades. [3]

It turns out that, absent human influences, 85% of the DNA sequence in oceanic bacteria, archaea and viruses is (was) unique every two hundred miles.  The consequences of mixing the seas up are not known.
Venter's assertion is reminiscent of Roger Revelle's momentous observation in 1957:

human beings are now carrying out a large scale geophysical experiment of a kind that could not have happened in the past nor be reproduced in the future.

Inadvertent 'experiments' -- involving jellyfish, oceanic micro-organisms, the global climate and much else -- arise from a global economy driven by huge social forces on which ecosystem science has to date had only a tiny influence.
Redressing the 'clumsiness' of those forces would probably require huge changes in awareness, among other things. [4] Tools like Google oceans (and, one day, more sophisticated ones) may play a useful role, perhaps more than we presently imagine; but they will have limits. In a reflection from Andy Revkin, Stephen Kellert cautions:

The sad reality is that while more abstract, vicarious/representational awareness of nature and its conservation via the video and computer have grown enormously, concurrently, there has been a profound decline in more commonplace, everyday experience and contact with nature and the often deeper and more realistic and lasting appreciation and action that comes from this personal involvement. 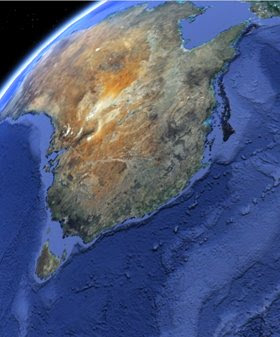 [2] (added 4 Feb) In a talk at the Zoology faculty at Oxford University relating to the paper Maximum Entropy and the State-Variable Approach to Macroecology, John Harte suggested that ecology is progressing beyond the gathering of data (the 'Brahe stage') and patterns (the 'Kepler stage' [sic]) towards general laws (the 'Newton stage').

[3] Genomics: from humans to the environment. A lecture at the James Martin 21st Century School. Roughly 34 minutes in to the podcast.

[4] It's not so much that we're riding a tiger, but that we are [part of] the tiger. This is expressed in a way I find compelling but disturbing and partly questionable ("command?") by Roberto Unger (Nature in its place, New writings):

...We are unquiet in nature because the mind concentrates and focuses a quality diffuse in nature: the mind is inexhaustible and therefore irreducible and uncontainable. No limited setting, of nature, society, or culture, can accommodate all we -- we the species, we as individuals -- can think, feel, and do. Our drivenness, including our drive to assert power over nature, follows from our inexhaustibility. We should not, and to a large extent we cannot, suppress, in the name of delight, stewardship, or reverence, the initiatives by which we strengthen our command over nature...

...Nothing should prevent us from tinkering with our natural constitution, inscribed in genetic code, to avoid disease and deformity. The place to stop is the point at which the present seeks to form human beings who will deliver a future drawn in its own image. Let the dead bury the dead is what the future must say back, through our voices, to the present. To let the future go free would show more than power. It would show wisdom.

Posted by Caspar Henderson at 14:44