This post follows a few traces from traditional aboriginal whaling and its echoes. [1]

Bowheads are among the longest lived animals: Nalutaliq, a white-headed bowhead, has been sighted off Baffin Island for more than a hundred years. In 1995 a crew of Iñupiat whalers from Wainwright, Alaska, found two stone harpoon blades in the blubber of a whale they were butchering. Stone points had not been used for more than a century -- not since commercial whalers brought metal tools to the Arctic and traded them to the natives. [2]

A favoured hunting craft was the Baidarka, "a living vessel whose skin caressed the shape of the waves." [3] But in the hunt for the whale, the bodies of smaller animals could become vessels of death:

In some hunts, the bladders of narwhals, walruses and seals were used as floats to the harpoon. Sometimes entire seals, skinned through the mouth with all orifices and wounds sewn shut, were used as drogues. Inflated through a bone tube, each seal float created a drag of about 100kg, exhausting the whale and reducing its chance of escape.

In Inuit mythology, Agloolik, a spirit that lives underneath the ice, gives aid to fishermen and hunters.

Another spirit, Wentshukumishiteu, sometimes terrifies the hunters away: 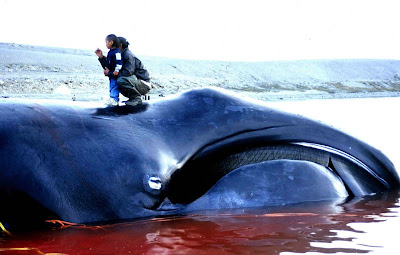 After the whale was killed, the biggest challenge was the tiresome chore of towing the enormous quarry ashore. Nuu-chah-nulth whalers employed charms...; some tied hummingbirds to the line, others turtles.

A chant from south-west Alaska contains this:

You are dying but your death will no be forgotten.
We will strip your bones of flesh, but we will send them back to the sea
that you may live again, so fear not. [4]

Following a sucessful hunt, writes Roman, communities from Kamchatka to Vancouver Island had a period of ritual mourning of about three days, as long as that for a man.

[1] Aboriginal whaling continues today, but with modern tools. This post follows an earlier one which refers to early modern European hunting of the bowhead.

[3] The anthropologist Margaret Lantis, notes Roman, suggested that a whale hunting cult extended from Kamchatka to Hudson Bay, and from Point Barrow, Alaska to the coast of Washington State. The cult may even have extended as far as Japan and Greenland (The Alaskan Whale Cult and its Affinities, 1938). According to T. T. Waterman (1920), the Makah whalers of the Olympic Peninsula in what is now Washington State imitated the grey whale quarry before each hunt, diving down deep into the water and staying down as long as possible. Each time they surfaced, the hunter would spout a mouthful of water towards the center of the lake, trying to sound like a whale. The most determined were reported to surface with blood trickling from their ears.

Posted by Caspar Henderson at 06:59