The eldest of the fishermen, Memo, rubs his grizzled chin in somber recollection, for one of our students has just asked a pointed and painful question: Which species have disappeared in his lifetime?

Solemnly, as though he’s reciting the names of his own deceased ancestors, Memo begins: the sea cucumbers, the fan clam, the lion’s paw scallop . . . . He’s working his way back in time, I think, moving from the most recently vanished toward the creatures that disappeared when he was a child.

In the early ’90s, he reaches the sharks; in the ’70s, the sea turtles; in the ’60s, the giant sea bass; and in the years of his childhood, the great totoaba, a six-foot croaker that was once pulled from these waters by the million.[1]

-- Aaron E Hirsh, who argues that a system of “individual transferable quota”, or “fish shares”, is can offer a path to more sustainable fisheries in many places. 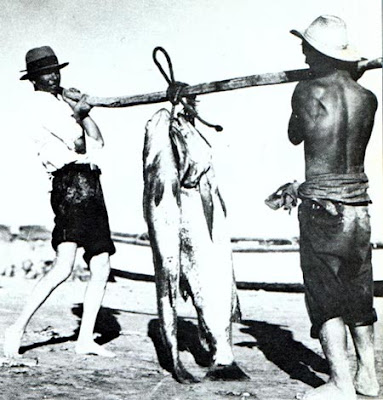 Email ThisBlogThis!Share to TwitterShare to FacebookShare to Pinterest
Labels: fisheries