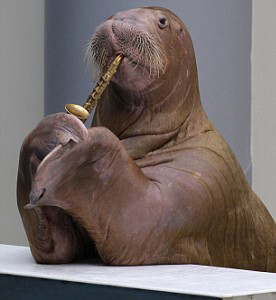 
page xvii: Walrus. "As the beast in shape is very strange, so it is of a strange docilitie, and apt to be taught". Here's a walrus doing aerobics to the tune of La Bamba.

The animal's environment, the background against which we can see it, can be rendered as something like the animal itself – partly unchartable. And to try to understand the animal apart from its background, except as an imaginative exercise, is to risk the collapse of both. To be what they are they require each other.


For the whole world is full of different creatures, like a book written with various words and full of sentences in which we can read what we should imitate and avoid.


To me the converging objects of the universe perpetually flow,
All are written to me, and I must get what the writing means


Every organism, even bacteria, would [on Koch's view] possess some degree of consciousness. The logical coherence escaped me: Only two chapters earlier, Koch was showing, there with strong empirical data, how complex networks of the human cerebellum and even the cortex operate entirely unconsciously.

Moreover, argues Dehaene, Koch accepts uncritically Giulio Tononi's mathematical theory of consciousness as integrated information (Φ) but this theory "makes no contact with such observations yet."
Some claims for consciousness are even more astonishing than those made by Koch. The physicist Henry Stapp, says that before human consciousness appeared, there existed a multiverse of potential universes.The emergence of a conscious mind in one of these potential universes, ours, gives it a special status: reality.
In this essay, David Deutsch reminds us that 'consciousness' has a huge range of meanings.
Posted by Caspar Henderson at 09:07