Once again, this report shows that the world’s primates are under increasing threat from human activities. Whilst we haven’t lost any primate species yet during this century, some of them are in very dire straits, In particular the lemurs are now one of the world’s most endangered groups of mammals, after more than three years of political crisis and a lack of effective enforcement in their home country, Madagascar. A similar crisis is happening in South-East Asia, where trade in wildlife is bringing many primates very close to extinction. 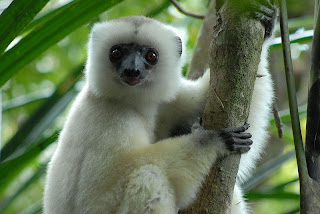 Posted by Caspar Henderson at 07:34