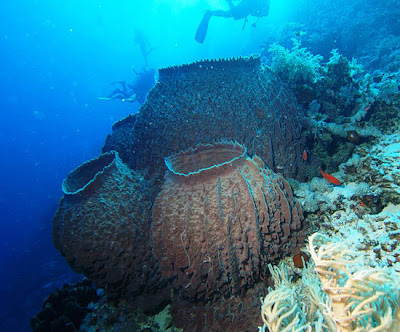 At one point in City of God, Augustine envisages Creation as a sponge:


I visualized you, Lord, surrounding [creation] on all sides and permeating it but infinite in all directions, as if there were a sea everywhere and stretching through immense distances, a single sea which had within it a large but finite sponge, and the sponge was in every part filled from the immense sea. This is the kind of way in which I supposed your finite creation to be full of you, infinite as you are. [1]

page 26: Spongebob Squarepants is made-up but Spongiforma squarepantsii is real.

page 27: Proteus syndrome is a progressive condition. Children are usually born without any obvious deformities. Tumors of skin and bone growths appear as they age. The severity and locations of these various asymmetrical growths vary greatly but typically the skull, one or more limbs, and soles of the feet are affected.
For those who curious as to some of the worst disorders that can occur to a human but who are not squeamish, there is Harlequin-type ichthyosis.
Mutants: On the Form, Varieties and Errors of the Human Body by Armand Leroi is a good place to start learning about mutation and deformity.