page 30: a sponge reef over an area from what is now Spain to Romania. See: glass reef.

page 31: Physarum polycephalum, a slime mold without a neuron, is able to memorize patterns of events. Ed Yong expands:


When we think about navigating the world, we might initially think of our own maps, or of the impressive migrations undertaken by familiar animals. But navigation can happen without much brainpower. Social insects like ants can create efficient trails linking their nests and sources of food, by laying down trails of pheromones in their wake. As more of them reach the food, they add their own pheromones, making the routes even more attractive to other ants. If the trails aren’t reinforced, the pheromones evaporate. That’s exactly like human hikers, whose collective feet trample effective trails into the landscape, while allowing boring or inefficient trails to overgrow.

page 32: Darwin's dilemma. In Chapter 10 of The Origin of Species Darwin concludes:


I look at the geological record as a history of the world imperfectly kept and written in a changing dialect. Of this history we possess the last volume alone, relating only to two or three countries. Of this volume, only here and there a short chapter has been preserved, and of each page, only here and there a few lines. Each word of the slowly-changing language, more or less different in the successive chapters, may represent the forms of life, which are entombed in our consecutive formations, and which falsely appear to have been abruptly introduced. On this view the difficulties above discussed are greatly diminished or even disappear.


To study geology is to be astonished at how hastily time reorders our planet’s surface, filling its craters, smoothing its mountains and covering its continents in seawater. Life is often the fastest to disintegrate in this constant churn of water and rock. The speed of biological decomposition ensures that only the most geologically fortunate of organisms freeze into stone and become fossils. The rest dissolve into sediment, leaving the thinnest of molecular traces behind.

page 33: Thea, a Mars-sized body. Recent research suggests different sizes for Theia: one smaller than Mars, and one four to five times bigger.

page 34: thinking about and feeling deep time. I was lucky to spend a couple of days earlier this week walking and exploring rocks and life in the relatively unspoiled Llyfnant river gorge (photo below).  As Robert Macfarlane and others who write so well about these issues rightly say, there are ways of knowing and experiencing/thoughts that only occur as a result of being on (in) the land.  Gnosis, adopted (rightly or wrongly) to mean knowledge experienced with all the bodily senses, is as important as episteme (taken to mean logically-derived knowledge). 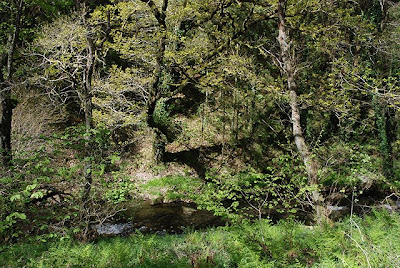 Posted by Caspar Henderson at 07:19