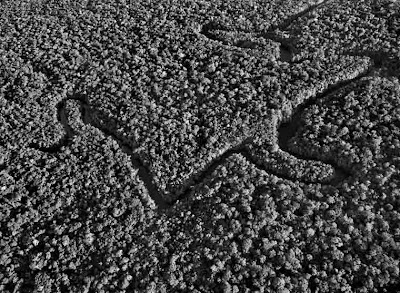 Neurons are highly diverse and sophisticated processors that collect, process and broadcast data via synapses, or contact points with other nerve cells...Our nervous system has perhaps 1,000 trillion synapses linking about 86 billion neurons...

...To visualize the brain's staggering complexity, recall those nature specials where a single-propeller airplane captures the immensity of the Amazon rainforest by flying for hours over the jungle. There are about as many trees in this rainforest as there are neurons in your brain (this statement will no longer be true in a few years if the forest continues to be cut down at the current pace). The morphological diversity of these trees, their distinct roots, branches, and leaves covered with vines and creeping crawlers, is comparable with that of nerve cells as well. Think about that. Your brain likened to the entire Amazonian rainforest.

-- from Christoph Koch's Consciousness: Confessions of a Romantic Reductionist pages 16 and 117.

Koch suggests that consciousness is a fundamental, elementary property of living matter analogous to electrical charge. Now that really is an astonishing hypothesis.

P.S. 30 May: Another way in which brains are astonishing: Microglia: the constant gardeners. Neurons account for only about 10% of the cells in the human brain.
Posted by Caspar Henderson at 23:59

Email ThisBlogThis!Share to TwitterShare to FacebookShare to Pinterest
Labels: Mind