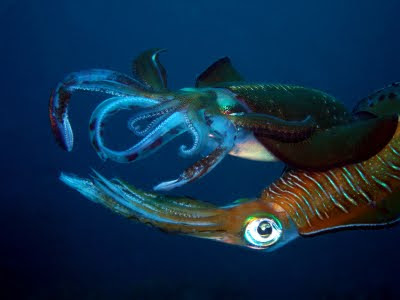 To meet a [Humboldt] squid in the wild is one of life's great pleasures. They follow your movements with intelligent, saucer eyes. Their emotions are written on their skin in quick-fire colour changes that pulse and ripple in incandescent waves across their bodies. The Humboldt's uncertain temper adds a little frisson to any encounter. Divers have been roughed up by squid or had their masks or gear tugged. After the adrenalin rush has passed, most divers feel the animals were more curious than aggressive. If they had really wanted to hurt them, with their huge strength they could have done far worse.

-- Callum Roberts in Ocean of Life: How Our Seas Are Changing. [1]

Roberts notes that the Humboldt squid seems to have benefited from expansion of its low oxygen habitat and from the loss of big predatory sharks to overfishing. [2] According to Ron O'Dor, its range has expanded from South America all the way to Alaska as some 90% of large fish have been eliminated by Man. [3] So the species looks like a real beneficiary of the Anthropocene.

On the other hand Rui Rosa predicts the animal's metabolism will drop in future because there will be more carbon dioxide in the water."The squid will be more lethargic and so more vulnerable to their predators because they won't be able to escape them any more." [4]

Could we, then, be witnessing a spectacular boom to be followed shortly by a spectacular bust in Humboldt squid numbers as a result of human impacts?  Is there a name for species such as this that ride the Anthropocene up and (perhaps) then crash? 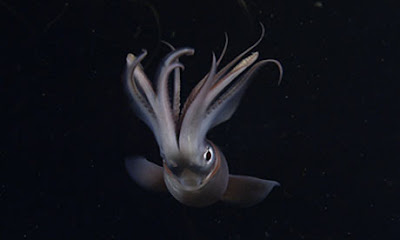 1. Reviewed in The Economist and the Financial Times. My interview with Roberts will be published in Mandarin and English by Chinadialogue
2. Invasive range expansion by the Humboldt squid
3. The incredible flying squid
4. Synergistic effects of climate-related variables suggest future physiological impairment in a top oceanic predator

Posted by Caspar Henderson at 20:28