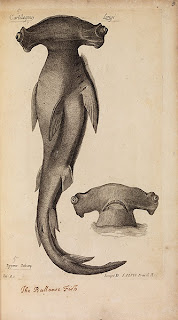 Henry Nicholls has written an efficient piece on sharks and marine food webs:


...In 2005, marine biologists...set out to the Line Islands in the middle of the Pacific Ocean to compare the marine communities living on different reefs. They found the reef systems least disturbed by people, Kingman and Palmyra, had the healthiest corals and supported the greatest biomass of fish ever recorded on a reef. What astonished them, though, was the abundance of sharks. The vast majority of the fish biomass consisted of sharks, and the biomass of prey fish was actually lower than that on more disturbed reefs nearby.

"This turns the textbook trophic pyramid on its head," says Sheila Walsh, an expedition member now at the Nature Conservancy in Virginia. "It doesn't even seem energetically possible." The only explanation is that small fish are being eaten as fast as they breed, so their biomass at any one time is much lower than that of their longer-lived predators...

Since then the slaughter has continued, with 40 million or more sharks being killed around the world every year.


...Even if sharks survive and their numbers eventually recover, things may not go back to the way they were. "Often we find that ecosystems have shifted in ways that mean the productivity of old - or the biomass of old - cannot be recreated," says Callum Roberts. "There are various pieces that have been taken out of the food web. Those connections will probably take a very long time to reinstate."...

Posted by Caspar Henderson at 06:16

Email ThisBlogThis!Share to TwitterShare to FacebookShare to Pinterest
Labels: shark