Ecological niche modeling adds even more evidence to the already overwhelming case that 'bigfoot' is actually a brown bear. But within historical memory stranger animals have existed and been extirpated as their habitats were destroyed:

The tretretretre is a large animal, like a calf of two years, with a round head and the face of a man. The forefeet are like those of an ape, as are the hindfeet. It has curly hair, a short tail, and ears like a man's...It is a very solitary animal; the people of the country hold it in great fear and flee from it, as it does from them.

-- this is a Megaladapis as described by Étienne de Flacourt in his Histoire de la Grande Isle de Madagascar of 1661 (and quoted in A Pleistocene Bestiary). 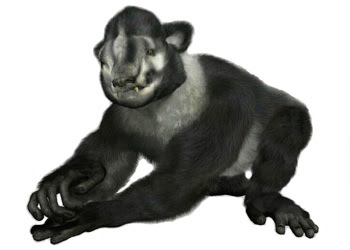 Image from the Atlas Virtual da Pré-História.
Posted by Caspar Henderson at 09:41