The sea is largely blue (empty of life) rather than green (full of plants and algae) for several reasons. [1] It has, however, a jelly-like 'skin', a sea-surface microlayer about a hundredth of an inch (0.254mm) thick that contains a 'menagerie of microbes'. As Carl Zimmer reports:

It may be hard to imagine such a fine coat of slime holding together for long on top of the heaving ocean. But Dr. [Oliver] Wurl has found that it is quite durable. “We have collected microlayer samples with wind conditions of 16 to 18 knots,” he said. “It’s not pleasant to be in a small boat at that wind speed. That tells us the microlayer is pretty stable.”

At this microlayer, gases are pulled down from the atmosphere. "It’s the ocean breathing through its skin," says Michael Cunliffe. Zimmer continues:

The 'skin' may play a critical role in the environmental well-being of the planet. Studies have shown that pollutants like pesticides and flame retardants can be trapped in the microlayer. 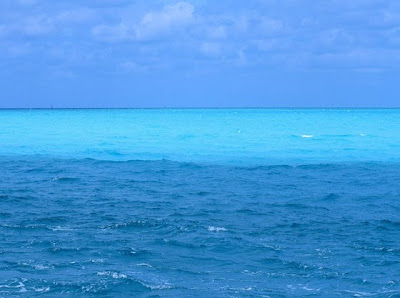 [1] Thomas Sherratt and David Wilkinson summarise an answer in Big Questions in Ecology and Evolution like this:

Much of the world's seawater is too dark for photosynthesis. In the euphotic zone, where there is enough light to support a green sea, other factors come into play. Large 'rooted' plants and macroalgae can only survive in the very small area of the ocean that is shallow enough for them to have access to light while being attached to the seabed, and large plants cannot survive by a floating way of life in most of the ocean, because they will be washed up by wind and currents. The leaves the question of why phytoplankton do not make most of the ocean green? The answer is that most seawater is too low in nutrients needed for their growth; one of the reasons for this impoverishment is the action of the plankton themselves through the biological pump. Physical processes, such as thermal stratification, are also important in maintaining low nutrients in the euphotic zone and may change with alterations to the Earth's climate.

Sherratt and Wilkinson note Alfred Redfield's realisation in the 1930s that ocean organisms themselves are largely responsible for creating the chemical environment in which they live rather than it being merely the background against which they evolve. James Lovelock has described Redfield as a forerunner to Gaia theory.

P.S. 29 July: a mechanism is proposed for "how some of the ocean's tiniest swimming animals can have a huge impact on large-scale ocean mixing."
Posted by Caspar Henderson at 09:59

Yes, it may well have a Gaian effect, as a large and stabilising ecological phenomenon in a very complex system (Hambler, C., 2004, Conservation , CUP). It may even be an evolved product of a team of species, like clouds may be, with a benefit to the whole team and beyond (See, for example, Spora and Gaia: how microbes fly with their clouds by W.D Hamilton & T.J. Lenton, Ethology Ecology & Evolution 10: 1-16, 1998).

If pollutants are changing the layer then yes, that could have a wider problematic impact - as with the ozone hole, small amounts of some unnatural chemicals can have a surprisingly big effect. Conversely, microbes are often pretty adaptable and resistant. How little we know... Time may tell - and fingers crossed!