Dolphin hotspots must be protected if the Ganges River Dolphin...is to survive in the Brahmaputra river system, according to a recent study. [1]

Estimates have put the total population... at around 2,000. Of these, between 240 to 300 inhabit the Brahmaputra River system in India...

“Our research shows accidental killing through fisheries by-catch, followed by poaching for oil, are the major threats to the dolphins of the Brahmaputra...” says Project Leader Abdul Wakid. “Their habitat is also being degraded by human activities. Dam building and a proposed seismsic survey in the Brahmaputra river are potential threats.”

The project...was prompted by the need for some robust dolphin population data after Oil India Ltd. proposed to start prospecting for oil along the bed of the Brahmaputra River using air guns and explosives.

The research identified eight river sections as potential protected areas and community-based dolphin conservation as the best strategy to save the dolphins.

How effective can a few protected 'hotspots' along the length of the river be? On the Yangtze, by Sam Turvey's account [2], the conservation areas proposed at one stage for river dolphins were quite far apart. Given that the animals probably traveled large distances up and downstream, the protection afforded by such areas would probably have been quite limited. In practice the reserves only ever really existed on paper so were never put to the test.

When I met Turvey last month I asked what he thought about of the prospects for the Ganges River Dolphin. He said he was just starting to look at the challenge but was struck that some individuals appeared to be surviving even in what looked like unfavourable conditions in the Kulsi, one of two smaller rivers in Assam in which the animal still lives in addition to the main channel of the Brahmaputra. [3]

What are the chances for successful community-based conservation on the Brahmaputra? If you believe Arundhati Roy, such efforts will be up against very powerful forces. [4]

Platanista gangetica, the Ganges River Dolphin has dwindled abysmally to less than 2000 during the last century owing to direct killing, habitat fragmentation by dams and barrages, indiscriminate fishing and pollution of the rivers. WWF India

[2] Witness to Extinction: How We Failed to Save the Yangtze River Dolphin (2008).

I only recently visited India to try to establish a collaborative conservation project on these remarkable animals...We [hope] to investigate when and why the species has disappeared from the Brahmaputra’s other tributaries. Some kind of human impact is certain, but is this overfishing, habitat degradation, mining, deforestation leading to increased erosion and run-off, etc etc.... who knows? The Kulsi was the first place that I saw the river dolphins, and as you can see from the photo, it's pretty horrendous habitat. In my opinion it's incredible that dolphins have managed to survive here at all! Seeing a river dolphin leaping out of the water, showing its mysterious, beautiful crocodile-like beak, in that fairly nasty, tiny little river against a backdrop of sand-mining and fishing boats was pretty surreal. The question of whether this is in any way a sustainable long-term habitat for them is another matter... at least the Brahmaputra itself seems a lot better, although this environment too is under increasing threat. 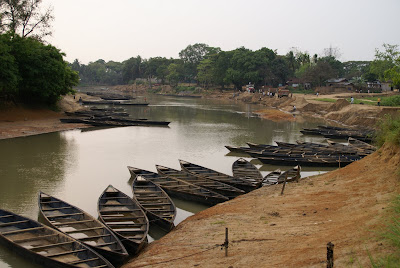 An AP report published the Straits Times quotes Gill Braulik, a researcher who took part in the study:

To protect them it is vital that we involve local river communities. In some places, like in the Kukurmara area of Kulsi River, the dolphins are a tourist attraction due to protection by local communities.

[4] Speaking on Nightwaves (BBC Radio 3, week of 13 - 18 July), Roy said India in democracy is a scam, "democracy for few, with the vast majority excluded":

The middle classes and upper classes have seceded from the rest of India. They are extracting everything they can from the ground and rivers. It's leading to....ecocide. Far from progress, the opposite is on the cards -- a collapse.

She was not talking specifically about the Brahmaputra, but in general about India's rivers and land. Is she right to blame 'only' the relatively wealthy for 'ecocide'?
Posted by Caspar Henderson at 01:01