It may be that all the particles [in the universe] we see were originally collected into a small dense region because it is easier to create a new bubble universe in such a configuration than it is to make a large, dilute universe from scratch. The growth of entropy in our observable universe, and the corresponding arrow of time [without which life -- metabolism, reproduction, evolution, memory -- would not exist], may be a reflection of the larger multiverse's insatiable desire to create ever more entropy by giving birth to new baby universes. If we could just have an angel's-eye view of the entire ensemble, it might all look quite natural.

Or perhaps not...[But] the universe is certainly trying to tell us something; it's our job to attempt to make out what it's saying as best we can.

-- from Our Place in an Unnatural Universe by Sean Carroll, included in What's Next? Dispatches on the Future of Science. 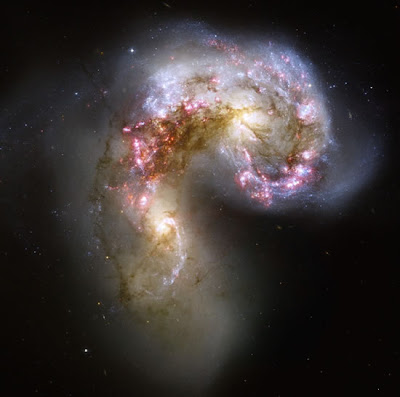 Image: the Antennae galaxies.
Posted by Caspar Henderson at 09:47

Email ThisBlogThis!Share to TwitterShare to FacebookShare to Pinterest
Labels: cosmology