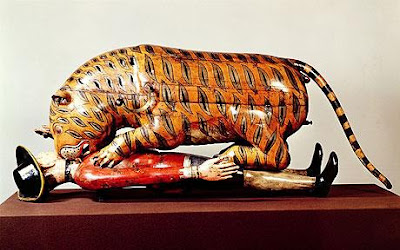 The more I've read, the more I'm persuaded that -- at least with large predators -- the victim of carnivorous attack is often blessedly protected from the horror of the objective experience.

Accounts by David Livingstone (almost eaten by a lion) and Leo Tolstoy (almost eaten by a bear) suggest that once the attack is in progress the victim goes into a state in which he or she feels little pain or terror.
Gibson does not quote from an extraordinary account by the late Australian philosopher Val Plumwood, who nearly fell prey to a crocodile:

...Our final thoughts during near-death experiences can tell us much about our frameworks of subjectivity. A framework capable of sustaining action and purpose must, I think, view the world "from the inside," structured to sustain the concept of a continuing, narrative self; we remake the world in that way as our own, investing it with meaning, reconceiving it as sane, survivable, amenable to hope and resolution. The lack of fit between this subject-centered version and reality comes into play in extreme moments. In its final, frantic attempts to protect itself from the knowledge that threatens the narrative framework, the mind can instantaneously fabricate terminal doubt of extravagant proportions: This is not really happening. This is a nightmare from which I will soon awake. This desperate delusion split apart as I hit the water. In that flash, I glimpsed the world for the first time "from the outside," as a world no longer my own, an unrecognizable bleak landscape composed of raw necessity, indifferent to my life or death.

Few of those who have experienced the crocodile's death roll have lived to describe it. It is, essentially, an experience beyond words of total terror...

Posted by Caspar Henderson at 22:23