BBC Earth News features photos of narwhals credited to Marie Auger-Méthé.
The 'unicorn' resonance is of course an old one, [1] but for more recent observers such as Wentworth D'Arcy Thompson the way in which the tusk grows in helix was also fascinating.
But until a few years ago little was known about the function of the tusk. Sexual display and male-male competition seemed likely explanations. [2] Martin Nweeia of Harvard School of Dental Medicine has discovered that the tusk has hydrodynamic sensor capabilities:

Ten million tiny nerve connections tunnel their way from the central nerve of the narwhal tusk to its outer surface. Though seemingly rigid and hard, the tusk is like a membrane with an extremely sensitive surface, capable of detecting changes in water temperature, pressure, and particle gradients. Because these whales can detect particle gradients in water, they are capable of discerning the salinity of the water, which could help them survive in their Arctic ice environment. It also allows the whales to detect water particles characteristic of the fish that constitute their diet. There is no comparison in nature and certainly none more unique in tooth form, expression, and functional adaptation.

Narwhals are thought to be among the marine mammals most sensitive to rapid change in the Arctic environment. IUCN lists them as 'near threatened'. 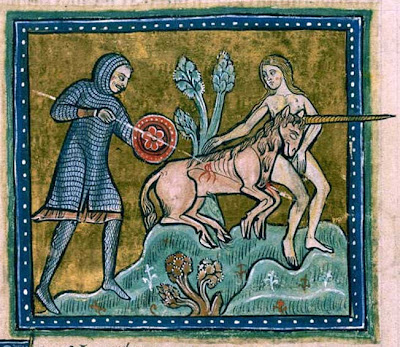 The unicorn is a fierce beast that can only be captured by a maiden.
Footnotes
1. The Natural History of Unicorns by Chris Lavers (reviewed here) is a good place to start. Wild speculations by cryptozoologists suggest a connection to the Elasmotherium, citing this account by Ahmad ibn Fadlan:

There is nearby a wide steppe, and there dwells, it is told, an animal smaller than a camel, but taller than a bull. Its head is the head of a ram, and its tail is a bull’s tail. Its body is that of a mule and its hooves are like those of a bull. In the middle of its head it has a horn, thick and round, and as the horn goes higher, it narrows (to an end), until it is like a spearhead. Some of these horns grow to three or five ells, depending on the size of the animal. It thrives on the leaves of trees, which are excellent greenery. Whenever it sees a rider, it approaches and if the rider has a fast horse, the horse tries to escape by running fast, and if the beast overtakes them, it picks the rider out of the saddle with its horn, and tosses him in the air, and meets him with the point of the horn, and continues doing so until the rider dies. But it will not harm or hurt the horse in any way or manner.

2. Thompson noted the hypothesis that the tusk might facilitate faster motion through the water.
Posted by Caspar Henderson at 21:45