New evidence suggests the total population of ancestors of modern humans 1.2 million years ago was just 55,500. [1]

What would be a 'good' size for the future total human population of the Earth? [2] 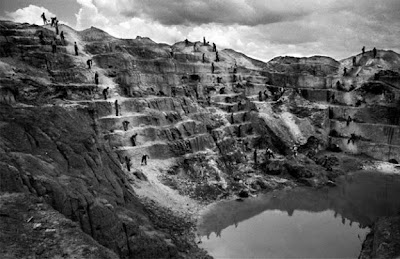 [2] Here I quoted six million as the probable number at the end of the Paleolithic (approx. 10,000 years ago) and five hundred thousand if the abundance of humans were linked simply to their size according to a curve of mammal abundance from mouse to whale. I don't recall where the first of these two figures came from.

Photo: Congo gold mine by Marcus Bleasdale
Posted by Caspar Henderson at 09:01

Email ThisBlogThis!Share to TwitterShare to FacebookShare to Pinterest
Labels: human