'The death of atoms, unlike ours, is never irrecoverable'

It is possible to demonstrate that this completely arbitrary story [about the progress of a single carbon atom through rock, air, leaf, grape, wine, liver, air, tree, worm, humus] is nevertheless true. I could tell innumerable other stories, and they would all be true...I could recount an endless number of stories about carbon atoms that became colors or perfumes in flowers; of others which, from tiny algae to small crustaceans to fish, gradually return as carbon dioxide to the waters of the sea, in a perpetual, frightening round-dance of life and death, in which every devourer is immediately devoured; of others which instead attain a decorous semi-eternity in the yellowed pages of some archival document, or the canvas of a famous painter, or those to which fell the privilege of forming part of a grain of pollen and left their fossil imprint in the rocks for our curiosity; of others still that descended to become part of the mysterious shape-messengers of the human seed, and participated in the subtle process of division, duplication and fusion from which each of us is born. Instead, I will tell just one more story, the most secret, and I will tell it with the humility and restraint of he who knows from the start that his theme is desperate, his means feeble, and the trade of clothing facts in words is bound by its very nature to fail... 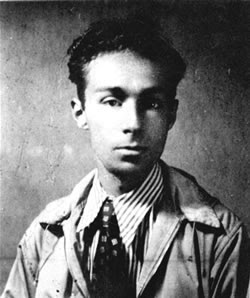 As an aside, it's possible that Levi was the first to follow the 'story' of a carbon atom in such a way. Whether or not that's the case, the trope has also been well used by, for example, Tyler Volk in CO2 Rising (2008).

P.S. 15 April 2011: a reminder that carbon is "formed in a star whenever three helium nuclei collide at one spot within less than a million millionth of a second. Every carbon atom in every living creature has been formed by such a wildly improbable collision."
Posted by Caspar Henderson at 12:04