'Once upon a time, there was a beautiful horse from Lascaux'

How to reconcile [the refined art of the mid to late Paleolithic] with the brutal practices of prehistoric hunters? How to consent to the arrow piercing the flesh of an animal, an imaginary murder committed by the artist? Before the revolution, hunting tribes from Siberia lived in conditions similar to those of the 'reindeer' era. Lot-Falk in Les rites de chasse chez les peuples siberiens writes: 'A hunter treated an animal as a creature at least equal to himself. Noting that an animal must hunt [sic] like himself, in order to live, man thought it had the same level of social organization. Man's superiority was manifest in the field of technology through his use of tools. In the sphere of magic, the animal was attributed with equal powers. Its physical strength, swiftness and perfected senses gave the animal a superiority highly praised by hunters. In the spiritual realm animals were credited with even greater virtues -- a close contact with the divine and with the forces of nature, which they embodied.' So far, we understand. The abyss of paleo-psychology begins with a bond between the killer and his victim: 'The death of the animal depends, to some extent, on the animal itself; it must consent to be killed by entering into a relationship with its murderer. That is why the hunter cares for the animal and tries to establish a close union. If the reindeer does not love its hunter, it will not bow to its death. Thus, our original sin and power are hypocritical. Only insatiable, murderous love explains the charm of the Lascaux bestiary. 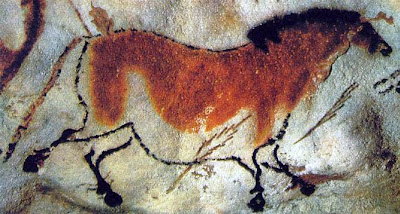