IUCN finds a new way to spin a story with a 'hit list' species whose plights highlight the way climate change is adversely affecting marine, terrestrial and freshwater habitats. [1] The 'top ten' are:

As communication to the general public IUCN's work may be useful and timely. Belugas, for example, are charismatic animals: intelligent and cute. [2] But it's only a start. In the Arctic alone, other threatened species include the Walrus and the Narwhal, which may become as rare in reality as the unicorn. [3], [4] And Dr Seuss got to the real point in 1954:

a person's a person no matter how small! 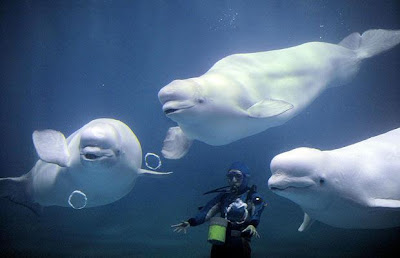 [3] And not just the Arctic, of course. Antarctica, among other places, may also lose many or most species altogether. Fen Montaigne's nice photos of Adélie penguins are likely to be an advance In Memoriam.

[4] What is the term for animals that only continue to exist in captive conditions? Will someone create a zoo that only contains such animals?
Posted by Caspar Henderson at 11:01