...firebrand, whiplash, shot
bolt of the earth's desire,
aimed, by these dried-up gullies and river-beds,
at the dark paradise of her spawning;
she is the green spirit looking for life
in the tight jaw of drought and desolation,
she is the spark which says
that all begins where all appears to end,
here, with this charred, half-buried stick
the quick rainbow
a twin to your own bright eyes:
shining out
among a generation mired in mud -
can you not see
that she is your sister?

-- a passage from Robin Robertson's version from Eugenio Montale's poem. [1]

Apparently there are more than fifty translations of this poem in English. Some analysis and food for thought via The Imaginary Museum.
To make a pedantic and unpoetic point, Montale was wrong to write that eels in Italian waters come from the Baltic (L’anguilla, la sirena/dei mari freddi che lascia il Baltico/per giungere ai nostri mari...). They come from the Sargasso. If the poem was first published as late as 1956 he should have known that.
More importantly, after millennia of abundance the European eel is, as of 2008, critically endangered. 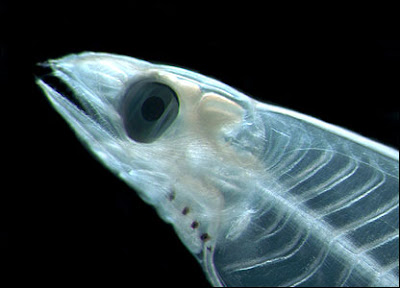