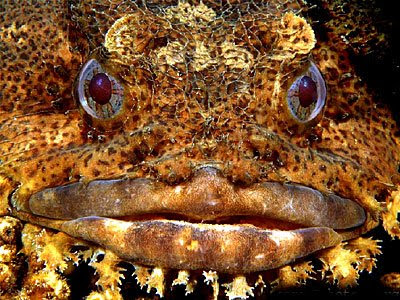 Nathalie Angier (Learning From a Muddy Muscle Master) celebrates the rapidity with which the male toadfish can contract and relax the muscles of its swimbladder (200 Hertz, or 200 times a second, compared to about 5 Hertz for the quadriceps of the fastest human sprinters), sacrificing strength for speed in order to sing most delightfully [1], [2].

Other writers have marveled at this animal's terrestrial 'cousin' [3], and imaginary hybrids derived from it. Orwell writes:

[In early spring], after his long fast, the toad has a very spiritual look, like a strict Anglo-Catholic towards the end of Lent. His movements are languid but purposeful, his body is shrunken, and by contrast his eyes look abnormally large. This allows one to notice, what one might not at another time, that a toad has about the most beautiful eye of any living creature. It is like gold, or more exactly it is like the golden-coloured semi-precious stone which one sometimes sees in signet-rings, and which I think is called a chrysoberyl.

The Strong Toad [of Chile] is an imaginary animal different from other toads in that its back is covered with a shell like that of a turtle. This Toad glows in the dark like a firefly and is so tough that the only way to kill it is to reduce it to ashes. It owes its name to the great power of its stare, which it uses to attract or repel whatever is in its range. [4]

[1] (Added 18 July) See also Grunting fish tell of the origins of human speech: At the base of our brain, where the back of our neck meets our head, may lurk the voice of a 400 million-year-old fish".

[3] Of course Toadfishes and toads are not cousins in any meaningful sense, except the most general one of both being vertebrates. They just happen to look similar to our eyes.

[4] Could the Helmeted water toad be a real world analogue?

Incidentally, the word toad, from Old English tadige, tadie, is said to be 'of unknown origin and with no known cognates outside English'. Is that right? The German is Kröte, the Dutch is pad and the French (joyously) crapaud; but the Danish, tudse, looks as if it comes from the same root as the English word. A Toadstone was thought to be a 'stone or stone-like object, supposedly magical (with healing or protective power) and found in the heads of certain toads.' It amuses me that in Spanish sapo (toad) rhymes with guapo (cute).
Posted by Caspar Henderson at 08:05

Email ThisBlogThis!Share to TwitterShare to FacebookShare to Pinterest
Labels: toad