by 2025 the scientific evidence of a hither-to-unknown large bi-pedal great ape will be sufficient to convince at least 50% of primatologists that a yeti/bigfoot-like creature exists.

I wonder if by 2025 the only living orangutans will be those associated with artificial breeding programmes. 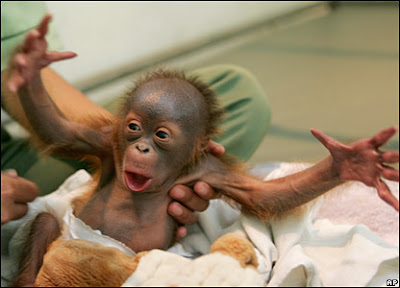 On the 12th of May [1855] I found another, which behaved in a very similar manner, howling and hooting with rage, and throwing down branches. I shot at it five times, and it remained dead on the top of the tree, supported in a fork in such a manner that it would evidently not fall. I therefore returned home, and luckily found some Dyaks, who came back with me, and climbed up the tree for the animal. This was the first full-grown specimen I had obtained; but it was a female, and not nearly so large or remarkable as the full-grown males [I had previously shot]. It was, however, 3 ft. 6 in. high, and its arms stretched out to a width of 6 ft. 6 in. I preserved the skin of this specimen in a cask of arrack, and prepared a perfect skeleton, which was afterwards purchased for the Derby Museum.

Only four days [later] some Dyaks saw another [one] near the same place, and came to tell me. We found it to be a rather large one, very high up on a tall tree. At the second shot it fell rolling over, but almost immediately got up again and began to climb. At a third shot it fell dead. This was... a full-grown female, and while preparing to carry it home, we found a young one face downwards in the bog. This little creature was only about a foot long, and had evidently been hanging to its mother when she first fell. Luckily it did not appear to have been wounded, and after we had cleaned the mud out of its mouth it began to cry out, and seemed quite strong and active. While carrying it home it got its hands in my beard, and grasped so tightly that I had great difficulty in getting free...

Wallace and his servants looked after the orphaned infant for some time, but it contracted a fever and

lost all appetite for its food, and, after lingering for a week a most pitiable object, died, after being in my possession nearly three months. I much regretted the loss of my little pet, which I had at one time looked forward to bringing up to years of maturity, and taking home to England. For several months it had afforded me daily amusement by its curious ways and the inimitably ludicrous expression of its little countenance...

Exactly a week after I had caught this interesting little animal, I succeeded in shooting a[nother] full-grown male Orangutan...

Posted by Caspar Henderson at 09:53