One might hazard that Buddhism teaches that life is a compulsive cycle of suffering and rebirth (as animal, human, ghost), a sleep of ignorance from which is possible to awake through awareness and compassion. In defining it so summarily one might be neither right nor wrong. 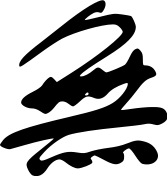 By all outward appearances, humans seldom lose their fascination with creaturely life. The caves at Dunhuang, for example, amply record this amongst the wealth of images and other artefacts, now threatened by too much breath and too many feet [1]. 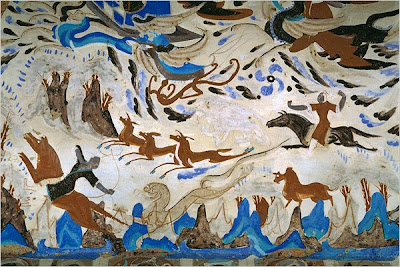 The silk paintings at Dunhuang were viewed ambivalently by Buddhist monks because their manufacture required the death of the silk worm, writes Colin Thubron [2]. But silk with rich designs and images continued to prove irresistible (as it had for several millennia beforehand), enchanting peoples in the furthest reaches of the world:

By the time their silk banners unfurled before the dazed Roman legionaries at Carrhae, the Parthians had been trading formally with China for half a century. Their decorative inheritance was an ancient Mesopotamian one, rich with the hunt and beasts of Assyria and Babylon, and in time Persian silks woven with Chinese yarn, came to beguile the West. As early as the fourth century AD, a Christian bishop was rebuking his flock for wearing imported silks that portrayed lions, bears and panthers instead of the disciples; and a silk cope enclosing the corpse of St Mexme survives at Chinon on the Loire, blazoned with cheetahs chained to a Zoroastrian fire-altar. [3]

The Diamond Sutra says, "Thus should one view all of the fleeting world - a drop of dew, a bubble in a stream, a flash of lightning in a summer cloud, a star at dawn, a phantom, and a dream". Its colophon is human (and generous): like a precursor of Creative Commons or PLoS, the manufacturer, a 'self' named Wang Jie, says that the Sutra is made for 'universal free distribution', and honours his parents, locating all to a specific time and place. Thubron (see note 2 below) writes that some religious manuscripts were 'stiffened by used paper that often turned out to be more informative than they did, [including]...even a funeral address for a dead donkey.'

2. Shadows of the Silk Road, page 94 (The book got mixed reviews; see, for example, the Guardian/Observer here and New York Times here)