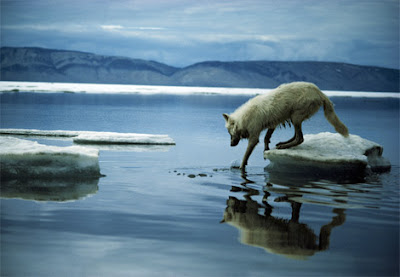 Einstein's 'God' may not play dice, but Man certainly does:


Genetic mixing between eastern wolves and coyotes [in Canada] began more than a century ago after settlers cut down forests to plant crops. Coyotes, which like open spaces, arrived in traditional wolf territory just as wolf populations were plummeting thanks to gun-toting settlers and deforestation. With so few of their own kind left to mate with, eastern wolves turned to the next best thing - coyotes.

More recent human-induced change is sure to create new hybrids too, as species change their habits in attempts to adapt. Some wildlife experts, for example, suggest that warmer temperatures in northern Canada could be prompting grizzlies to spend less time hibernating and more time roaming outside their traditional range, so coming into contact with polar bears more often. In April 2006, an American sports hunter shot the first documented cross of a polar bear and a grizzly in the Northwest Territories. Though bear hybrids are not nearly as common as wolf/coyote crosses, the discovery of this "grizzlar" has prompted discussion among members of the Committee on the Status of Endangered Wildlife in Canada, who have to come up with a recommendation for dealing with hybrids...Marco Festa-Bianchet, a biologist at the University of Sherbrooke in Quebec, who heads the group, describes the task as "godawfully complicated". [Richard] Hobbs [a restoration ecologist in Western Australia] agrees, but adds: "To say you shouldn't think about it is like putting your head in the sand."

-- from Nature 2.0: Redefining Conservation by Sharon Oosthoek. It's a good article but can only go so far in the space available. What, for example, about the jack pines of the boreal forest, which are reported to lack the natural defences of the lodgepole pine?

The tropical forests, including Amazonia (see, for example Royal Society B: Climate change and the fate of the Amazon), probably present at least as large and complex a set of challenges as the boreal forests (and drylands) mentioned by Oosthoek.

In 1984, before ideas like 'Nature 2.0' or 'adaptive conservation' developed, things looked probably different. But it's unlikely that what E.O. Wilson wrote then is altogether irrelevant now:


The forest [in Suriname into which I had wandered] was a tangled bank tumbling down to the grassland's border. Inside it was like a living sea through which I moved like a diver groping across a littered floor. But I knew that all around me bit and pieces, the individual organisms and their populations, were working with extreme precision. A few of the species were locked together in forms of symbiosis so intricate that to pull out one would bring others spiraling to extinction. Such is the consequence of adaptation by coevolution, the reciprocal genetic change of species that interact with each other through many life cycles. Eliminate just one kind of tree out of hundreds in such a forest, and some of its pollinators, leaf eaters, and wood-borers will disappear with it, then various parasites and key predators, and perhaps a species of bat or bird that depends on its fruit -- and when will the reverberation end? Perhaps not until a large part of the diversity of the forest collapses like an arch crumbling as the keystone is pulled away. More likely the effect will remain local, ending with a minor shift in the overall pattern of abundance among the numerous living species. In either case the effects are beyond the power of present day ecologists to predict. It is enough to work on the assumption that all of the details matter in the end, in some unknown by vital way.

Posted by Caspar Henderson at 09:12