In the story, Alexander asks one of the wise men, "which animal is the most cunning?". The Brahmin answers, "the one Man does not yet know."

So it goes for the Higgs Boson, which physicists hope to add to the elementary particle menagerie.

[Higgs himself is famously not happy with the name. I would vote for 'Boojum' had it not already been used to describe something else. But the term is now fixed.]

In the 'Cerncast' accompanying the Guardian package of articles about the LHC, Jim al-Khalili suggests that sometimes it's what you don't find what you're expecting that life gets most interesting. So, for example, the failure by Michelson and Morley to measure movement of the Earth against a luminiferous aether help prepare the way for the theory of relativity. It would be equally momentous, said al-Khalili, if the LHC finds no Higgs Boson [see also article here].

If it turns out not to be there (and at present this is considered unlikely), then perhaps this non-existent particle could be called, or not be called, the 'Grin' -- standing for 'gradually receding into nothing' -- of a cosmic Cheshire cat. 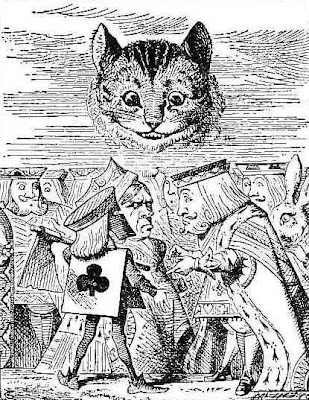 The executioner's argument was, that you couldn't cut off a head unless there was a body to cut it off from: that he had never had to do such a thing before, and he wasn't going to begin at his time of life. -- Alice

Posted by Caspar Henderson at 08:28