Overall, seagrasses are in a vulnerable state. Seagrass habitats are already declining due to increasing water temperatures, algae growth and light reduction, which are all effects of global change. [1]

Seagrass provides shelter for many animals, including fish and shellfish, and can also be a direct food source for dugongs, turtles, sea urchins and seabirds. [2] 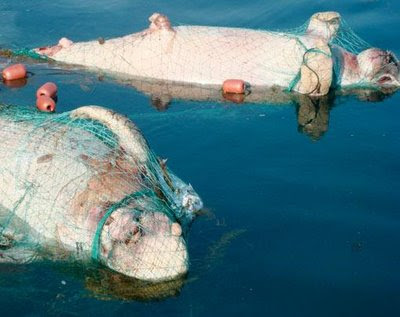 One of the things I'd like to know more about is the cognitive and emotional lives of the still existing Sirenia (the dugongs and manatees). Do they approach anywhere near the complexity of their cousins the elephants? Are they a lot 'dimmer?', like their even closer cousins the hyraxes, or just different? [3] For Steller's Sea Cow we have only a few fragments in the historical record:


I could not observe indications of admirable intellect...but they have indeed an extraordinary love for one another, which extends so far that when one of them was cut into, all the others were intent on rescuing it and keeping it from being pulled ashore by the close circle around it. Others tried to overturn the yawl. Some placed themselves on the rope or tried to draw the harpoon out of its body, in which indeed they were successful several times. We also observed that a male two days in a row came to its dead female on the shore and enquired about its condition. Nevertheless they remained constantly in one spot, no matter how many of them were wounded or killed. [4] 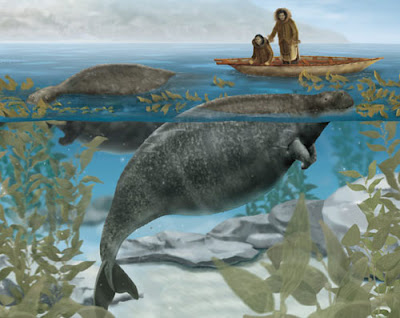 1. Mats Björk, a co-author of the IUCN report Managing Seagrasses for Resilience to Climate Change (released 25 July 2008). The report "analyses the threats faced by these marine flowering plants and provides survival strategies". "Managing for resilience" is a key theme for IUCN - for example, with regard to mangroves and coral reefs.

3. And how much if anything can we reasonably deduce about attitudes to these animals in ancient cultures? What, for example, does a 5,000 year old wall painting of a dugong, found in Tambun Cave in Malaysia, indicate? [And how strange is this?].

4. from Journal of a Voyage with Bering, 1741-42 by Georg Wilhelm Steller, quoted by Callum Roberts in The Unnatural History of the Sea. 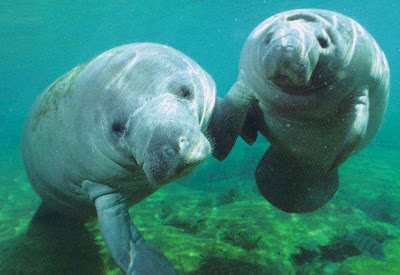 Posted by Caspar Henderson at 01:01

The second image you have is actually a pair on manatees. Their tails are rounded compared to those of a dugong's. (think: mermaid)