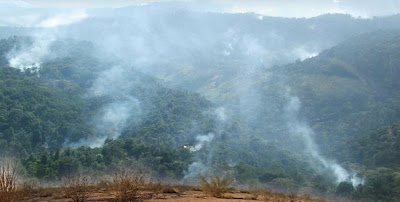 Last week the wildlife service said it planned to double the number of armed guards in Kenyan parks over the next five years and was studying whether to put electric fences around Mount Kenya, the Mau forest, Mount Elgon and the Cherangani hills. The model would be a 250-mile fence which has almost been completed around the Aberdare mountain range by the Kenya-based conservation group Rhino Ark.

"Kenya is destroying itself. The population has reached an unsustainable level. We are killing ourselves slowly by destroying the forests and settling there. Destruction of the Mau is like dancing with death. We should see environmental destruction as a greater threat than anything else."