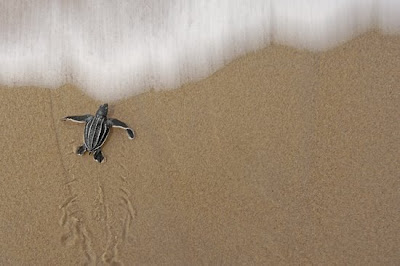 Unlike the massive, overhanging shell of other sea turtles, the leatherback's flexible, formfitting carapace merges almost seamlessly with its thick neck and muscular shoulders. Seven ridges run the length of the shell—adaptations, perhaps, for smoothing and directing the flow of water. The turtle's head is a prow; the carapace tapers toward the back like a teardrop.

The leatherback also propels itself with an efficiency no other sea turtle can match. All sea turtles can fly through the water by flapping their flippers vertically, generating thrust on both the upstroke and the down. But while other species sometimes shift to a less efficient paddling motion, the leatherback uses its longer flippers exclusively as wings. "It's almost pure underwater flight," says Jeanette Wyneken, who has analyzed leatherback swimming with high-speed video.

-- from Ancient Mariner, a feature by Tim Appenzeller which reports that Atlantic populations seems to be making something of a recovery. Great if that continues. What I saw in the East Papua nearly three years ago suggested a bleaker picture for many nesting populations in the Western Pacific.

Here's a bright note from the Great Turtle Race.
P.S. 18 May: and there appears to be good news from Gabon, with the discovery of large colony there.
Posted by Caspar Henderson at 09:45