Yes, the differences between Man and other animals are less than philosophers such as Wittgenstein and Nagel supposed, says Mark Vernon [1]; but that does not mean we should suppose there are no differences.

Rather, Vernon argues, it is a question of how we should recalibrate our understanding of the gap between ourselves and them; and moral and rational intelligence -- properties unique to humans -- are inextricable from linguistic ability:

a deeper understanding of what it is to be human can emerge from "somewhere between" the wolf and the philosopher. 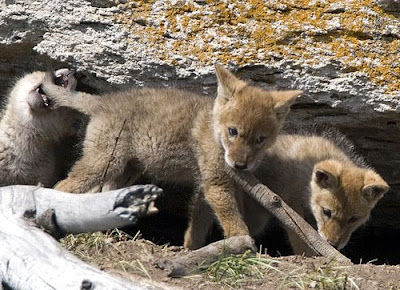 Language without feeling is bereft of meaning, but feelings exist, meaning exists, without any verbal language, as a core consciousness of mute emotions and wordless perceptions.

Some evidence indicates that forms of morality do too. As Deborah Blum writes in her review of Wild Justice:

[Mark Berkoff and Jessica Pierce] see moral actions as dictated by the behavioural code of social species, the communal operating instructions that bond a group safely together, the "social glue" of survival. They believe such codes are necessarily species-specific and warn against, for instance, judging wolf morals by the standards of monkeys, dolphins or humans.

Still, a "moral" decision can seem remarkably similar across many species.

the virtues we need, if we are to develop from our initial animal condition into that of independent rational agents, and the virtues that we need, if we are to confront and respond to vulnerability and disability both in ourselves and in others, belong to one and the same set of virtues, the distinctive virtues of dependent rational animals, whose dependence, rationality and animality have to be understood in relationship to each other.

[1] An article in a series titled Should we care about animals?
Posted by Caspar Henderson at 15:02