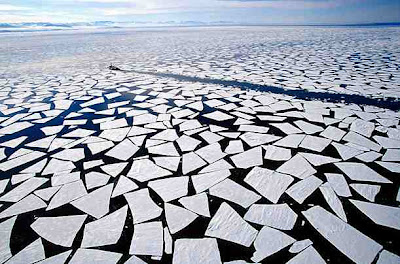 Scientists are exploring the Gamburtsevs -- 'ghost' mountains of undetermined age that have been buried far beneath the Antarctic ice for perhaps 15 million years [1].

55.8 million years ago, at the Paleocene-Eocene thermal maximum (PETM), the average annual temperature at both poles was 10 to 20 °C. The Arctic ocean warmed to over 22°C in summer. Antarctica was not only ice-free but warm.

Atmospheric concentrations of greenhouse gases are probably faster at present than a any time since the PETM. Unlike 56 million years ago, however, Antarctica is separated from other continents, and this (as well as other significant differences) means the consequences of today's rise are unlikely to play out the same way. So how will Antarctica change this time? How many existing life forms will be eliminated? What will replace them? Could life come to the Gamburtsevs, and would it be for the first time since they came into existence?

P.S. From the other end of the planet, dramatic footage of Sermeq Kujalleq, the world's fastest glacier. (And, 17 Oct: Arctic air temperatures hit record highs)

Far off from these, a slow and silent stream,
Lethe, the river of oblivion, rolls
Her watery labyrinth, whereof who drinks
Forthwith his former state and being forgets--
Forgets both joy and grief, pleasure and pain.
Beyond this flood a frozen continent
Lies dark and wild, beat with perpetual storms
Of whirlwind and dire hail, which on firm land
Thaws not, but gathers heap, and ruin seems
Of ancient pile; all else deep snow and ice

Posted by Caspar Henderson at 09:43