An end to suffering... 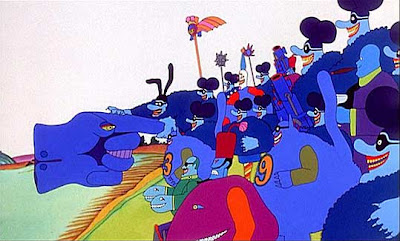 ...but probably not as the Buddha meant it. David Pearce of BLTC does a Hedonistic Imperative spiel for H+ magazine which appears to hold that, contra Aristotle, happiness is a mental state and not an activity:

In maybe three or four decades or so, we’ll be choosing such traits as the average hedonic set point of our children. Over time, I think allelic combinations…that leave their bearers predisposed to unpleasant states of consciousness – unpleasant states that were genetically adaptive in our ancestral environment – will be weeded out of the gene pool. For a very different kind of selection pressure is at work when evolution is no longer ‘blind’ and ‘random’, i.e. when rational agents design the genetic makeup of their future offspring in anticipation of its likely effects. In that sense, we’re heading for a post-Darwinian transition – ultimately I believe to some form of paradise-engineering.

Ataraxia or Eudaimonia may not be illusory or wrong as goals, but how intelligent, compassionate and wise would the designers of this imagined world be? What about unpleasant states of consciousness that do not arise because of genetically adaptive responses shaped by ancestral environments? And how plausible is this?:

If we want to, we can use depot contraception, redesign the global ecosystem, and rewrite the vertebrate genome to get rid of suffering in the rest of the natural world too. For non-human animals don't need liberating; they need looking after... Just as we don't feed terrified live rodents to snakes in zoos - we recognize that's barbaric - will we really continue to permit cruelties in our terrestrial wildlife parks because they are "natural"?

So we contemplate a future in which (say) tigers and eagles are dosed with Meat 2.0 and no longer hunt? It's almost enough to send one back to the anecdote retold by Adam Phillips in Darwin's Worms. Asked "don't you think there's too much suffering in the world?", the composer John Cage answered, "No, I think there's just the right amount". 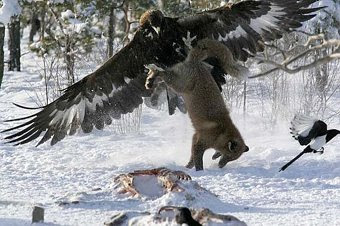 (photo from when eagles go bad...)

P.S. 22 Oct: I just learned via Andrew Sullivan that Brian Appleyard homes in on the same passage from David Pearce as I do and has even less time for the argument.
Posted by Caspar Henderson at 09:38