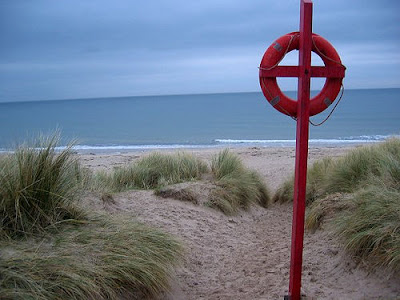 The print version of William Dalrymple's review of three books on early medieval art contains a beautiful illumination from the late 12th century showing St Cutbert praying in the sea, 'with his feet subsequently dried by otters'. I haven't found a version of the picture online, but here is the view from Bamburgh beach from where he is thought to have waded in.

Dalrymple notes, incidentally, that the 'Celtic' wheel cross is Coptic in origin.

P.S. The eider duck, known in Northumberland as "Cuddy's" duck, is said to be the first bird in the world to have been given conservation protection, when St Cuthbert offered the eider duck sanctuary on the Farne Islands in the seventh century.
Posted by Caspar Henderson at 07:57